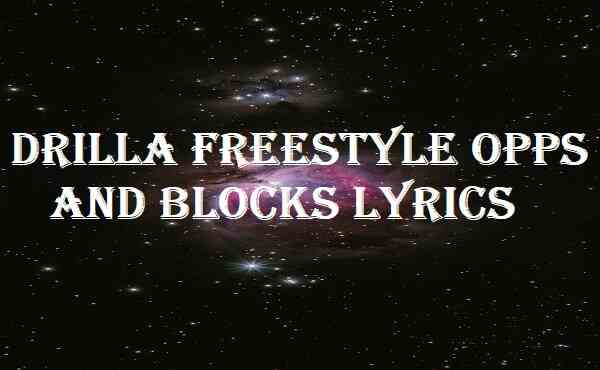 Drilla Freestyle Opps And Blocks Lyrics. Drilla ain’t do it, why is you dissing? I say what I want, I bet you gon’ listen Dead Opps was weak, but I bet they still listen, bi^^h Got some other sh^t to talk about.

Say I wouldn’t diss no more, I lied, too many done opps died
ni^^as keep mentioning Yarmel name
And none of these ni^^as been sliding
We don’t pay these goofys no attention
You know we doing them rappers
Be outside yo’ house with my mattress
Don’t leave ’til your brain get splatted
Thirty got hit with the thirty, TWhy got hit in his head
Caught Waldo making the status, left him on Calumet dead
I guess BD Ray thought I was sweet, he died from shots on the leg
You know I can’t forget D-Money, they left him at the parklot dead
That sh^t bе crazy, Dead Opps got you ni^^a’s attention
Most of that sh^t weak not to mention
Lil Reese got shot in the neck, I can’t listen
What is you saying? Why is you whispering?
Drilla ain’t do it, why is you dissing?
I say what I want, I bet you gon’ listen
Dead Opps was weak, but I bet they still listen, bi^^h
Got some other sh^t to talk about
But I don’t even gon’ talk about it, we just spin their blocks

You know we tryna chalk it out, got a thirty tryna hawk you down
I’ve been tryna be cool with these labels calling out
A lot of bi^^hes want come around
They know I’m a hot ni^^a so the opps calling around
They tryna see when I’m coming around, I ain’t stupid, bi^^h
We the one come slide, we’ll gun you down
We all got Glocks with a lot of rounds
I don’t need no sound, make a lot of sounds
I would mentioning some names but we’ll gun you down
Don’t need no investigating ’cause I was some where celebrating
Heard he got shot in his top, free Meditat
Now his whole hood devastated
Y and ’em flaming yo’ homie right now
f^^k ’em, they a^^es dead
We got Glocks .45 and 40’s and 9’s
We pop out at yo’ a^^, you dead
ni^^a pop out the cut on me
He had me freezed but his a^^ was scared
If it at the other way around
You would be on the sidewalk tryna live, stupid

These ni^^as been dissing and hiding
Know that’s the main reason y’all dying
I was toting that .45
If you don’t got a stick, you can’t get in my ride
That bi^^h want me, say she like my vibe
Told that lil’ bi^^h I’m one of a kind
Got his lo’, now we sitting outside, might creep through the back
I might come through the side
Curryo head was big, that’s why his sh^t got popped
And TWhy couldn’t take all those shots
They say he got caught trying to talk to a bop
And I ain’t gon’ talk about Draco
They know why his a^^ got dropped

They in internet woofing and be in them keyboards
But they never posted on the block
Now, let’s talk about Nuski
Target ain’t do nothing but make him a target
Hop out the whip and discharge it
Keep shooters with me, when we walk up, we sparking it
Nah, we don’t leave no witness ’cause ni^^as bi^^hes
Glocks got a extended, whip it’s tinted, I can’t be a victim
Can’t f^^k with that bi^^h if she f^^k with them ni^^as

Its My Life Its Now or Never Lyrics