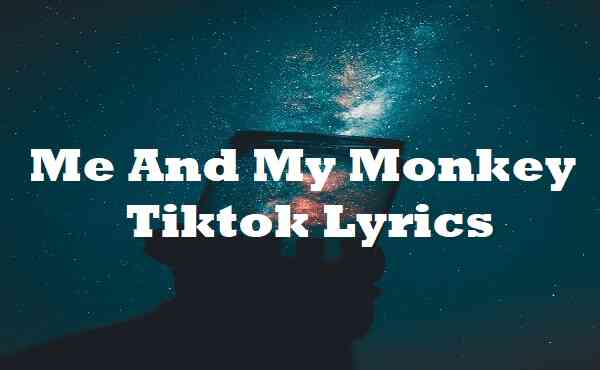 Me And My Monkey Tiktok Lyrics By Robbie Williams. Main song words are Me and my monkey With a dream and a gun I’m hoping my monkey don’t point that gun at anyone Me and my monkey Like Butch and the Sundance Kid Trying to understand why he did what he did.

Me And My Monkey Tiktok Lyrics

There was me and my monkey
And with his dungarees and roller blades smoking filter tips
Reclining in the passenger seat of my super-charged jet black Chevrolet
He had the soft-top down (he liked the wind in his face)
He said ‘Son, you ever been to Vegas?’ I said ‘no’
He said ‘that’s where we’re gonna go – you need a change of pace’
And we hit the strip with all the wedding chapels and the neon signs
He said ‘I left my wallet in El Segundo’ and proceeded to take two grand of mine
We made tracks to The Mandalay Bay Hotel
Asked the bell boy if he’d take me and my monkey as well?
He looked in the passenger seat of my car and with a smile he said
‘If your monkey’s got that kind of money sir, then we’ve got a monkey bed!’

We got the elevator, I hit the 33rd floor
We had a room up top with the panoramic views like nothing you’d ever seen before
He went to sleep in the bidet and when he awoke
He ran his little monkey fingers through yellow pages
Called up some escort services and ordered some okey doke
Forty minutes later there came a knock at the door
In walked this big bad a^^ baboon into my bedroom with three monkey w^^^^s
‘Hi! My name is Sunshine – these are my girls
Lace my palm with silver baby and oh yeah, they’ll rock your world’
So I watched pay-per-view and polished my shoes and my gun
Was diggin’ old Kurt Cobain singing ’bout lithium
There came a knock at the door and in walked Sunshine
‘What’s up? You’d better get your a^^ in here boy, your monkey’s having too much of a good
Time!’

Got tickets to see Sheena Easton, the monkey was high
Said it was a burning ambition to see her before he died
We left before encores, he couldn’t sit still
Sheena was a blast baby but my monkey was ill
We went to play black-jack, kept hitting twenty three
Couldn’t help but notice this Mexican just staring at me
Or was it my monkey? I couldn’t be sure
It’s not like you’d never seen a monkey in rollerblades and dungarees before
Now don’t test my patience cause we’re not about to run
That’s a bad ^^ monkey boy and he’s packing a gun
‘My name is Rodriguez’, he says with death in his eye
‘I’ve been chasing you for a long time amigos, and now your monkey’s gonna die!’

Looks like we’ve got ourselves a mexican standoff here boy
Huh…
And I ain’t about to run
Put your gun down, boy
Huh huh…
How did I get mixed up with this f^^king monkey anyhow?

I Lose My Mind When It Comes To You Tiktok Lyrics